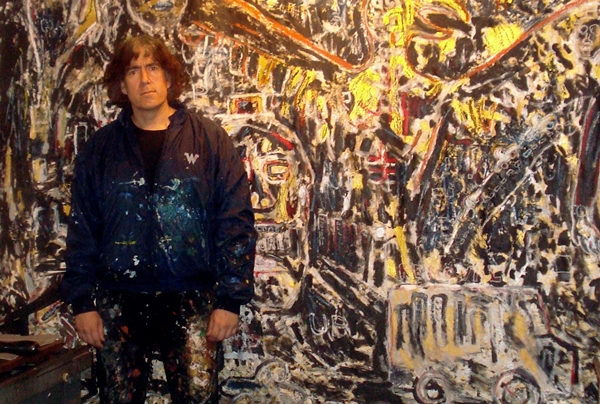 Art, stigma and other things

Some people spend all their spare cash on vices. Artist Andrew Sarjeant prefers to spend it on advertising his extraordinary art. The 48-year-old has been diagnosed with severe obsessive-compulsive disorder and low-level schizophrenia, but says that shouldn’t stop him from contributing to society.

“If people are willing to be more flexible about the way contributions are offered and focus on the quality of the finished achievements, there are a lot of people [like me] under the radar who would contribute greatly to society,” he says.

In Andrew’s case, in spite of the terrible problems he has with his medication affecting his day-to-day energy levels and the intense fear he experiences as a result of his OCD, it’s his art that is his gift to others.

Through his art he wants to highlight that people with mental illness care about a range of issues, “such as the environment, unnecessary violence, and exploitation as well as the more positive aspects of life, such as humour, tolerance, understanding, peace, love, and unity”. He finds inspiration everywhere.

“I find music and symbols interesting, a movie I’ve seen, something compelling I’ve read, a photograph or certain people that I meet – it all inspires me,” he says. “And I like to put forward a narrative about those things in my paintings.”

Counsellor and fellow artist Chandra Marks is a big fan of Andrew’s work and loves his “very busy, very comic book style of painting”. She first met Andrew at an art class at Henderson’s Corban Estate Arts Centre. “Andrew’s work is very symbolic. He thinks about the meaning in each and every piece and listening to him talk about it is fascinating,” she says.

Chandra’s interest and encouragement in Andrew’s art came at a point when he was feeling very low. “It felt fantastic to have a timely, much needed endorsement,” he says.

Art is a huge part of how Andrew keeps healthy.  “Without my art, I don’t know what I would do.”

However, he also has other interests that help keep him well. “I love the language and structure of music and play the electric guitar,” he says. “Exercise is also something that I try and do regularly. I used to exercise at a gym, but now I walk a lot and I have a stationary exercycle and weights.”

Most recently Andrew showed his work in an exhibition “Two Worlds” at a popup gallery on New North Rd (October, 2012). In 2013 he would like to get stuck into a new exhibition, producing 50 giant-sized paintings and getting them together in one place to see what people think of them.

“People liked the art and the colours,” he says. “I want to use that to bring mental health concerns to the forefront, but also to highlight that with the appropriate help and viewed with an open mind, people with mental illness can interpret and add to the world with dignity.”