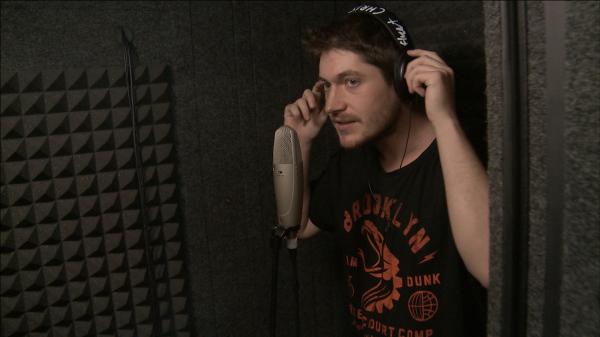 Rapper and performance poet Chris McMurray is drawing on his personal experiences to help challenge the stigma around mental illness.

Music and the spoken word have played a key role in the 23-year-old Aucklander’s road to recovery and his art is having a positive impact on others too.

“I say an honest story with my rap and my hip-hop,” says Chris. “Sometimes I talk about having a mental illness. It’s to let someone who hasn’t any personal experience feel what it’s like.”

Reflecting on the past

When he was a teenager, Chris quit school, got in with the wrong crowd and started dabbling in illegal drugs.

Things came to a head after a drug binge left him wide awake for four days and “off the planet for a good few months”. He was hospitalised and eventually diagnosed with schizophrenia and bipolar disorder.

Chris had the support of his mum during his breakdown and, while he’s not living with her anymore, she’s still there when he needs her. “Any time I need to talk to her, she’ll be on the phone. She’s always there to support me financially and emotionally.”

Chris raps about his experience of being unwell so he can connect with others in similar situations, as well as those who love them.

“Some things you can only express in a creative way,” he explains. “I talk about hearing voices. I talk about them as if they’re 100 per cent real because, when you’re in the moment of mania, there is no second to think ‘is this real’? I’ve heard a lot of people say ‘thanks for sharing your message’. ”

He says the stigma associated with mental illness can be a huge barrier to recovery, which is why support from friends and family is so important.

“When I was first diagnosed, two of my close friends at the time came to visit me in hospital. It was good because it gave them a better idea of what I was going through. Even though they saw me at my lowest, they still stayed friends with me.

“It was awesome that I was able to just go back into a normal life where everyone was as accepting as before.”

Chris, who is studying towards a Certificate in Foundation Sound and Music, says writing performance poetry and rapping onstage is therapeutic.

One of his regular gigs is at central Auckland’s Thirsty Dog bar, where he performs most Tuesday nights. “It does help things on the inside get out. When you say the things that are in your mind, it builds a fortification for what you’re saying. You get acceptance and reassurance.”

As well as penning poetry about his experiences of being mentally unwell, Chris enjoys exploring themes of spirituality.

“I like to take an idea and instead of preaching, I just give my thoughts on it. I give my ideas on what’s a better world.”

While Chris would like to say he exercises regularly and eats well, he admits that more often than not this isn’t the case. However, being self-aware and recognising the things that can make him unwell has meant he’s been able to reduce and finally eliminate his medication.

He also finds talking therapy – whether it’s among friends or with a counsellor – useful because it allows him to articulate his thoughts. “I don’t see counsellors as doctors. They’re good to have to listen. They’re rational and logical.

“Socialising is quite good too. You can just talk about whatever you need to say.”