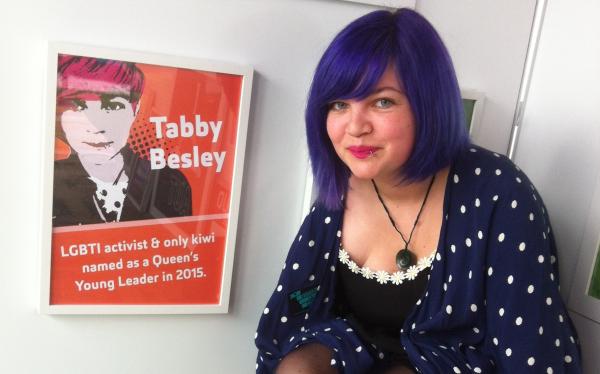 Tabby Besley is at the forefront of young people trying to change the public’s negative opinion, attitudes and behaviour for the better. Her experience lies with the LGBTTIQ* community, but aligns with other anti-discrimination movements – and we can learn from her wisdom.

22-year-old Tabby is no stranger to stigma and discrimination. Nor is the national coordinator of InsideOUT unfamiliar with mental distress. Since coming out as bisexual in her teens, the Wellingtonian has seen a lot of stigma, stereotyping and myths around bisexuality.

“It’s difficult for people to accept it,” she says. “So when we don’t see our identity reflected, and if people bully and discriminate against us, then that has a hugely negative impact on our wellbeing.

“We start believing that who we are is wrong and there’s no place for us in society, which of course leads to all sorts of mental distress; anxiety, depression, self-harm and more.”

About stigma and discrimination

Tabby says she was lucky she had a supportive school and an accepting family, but she was still bullied about her sexuality at school.

She’s observed that most discrimination comes from a lack of understanding, so thinks education and awareness are two of the most important things we can do to combat stigma and discrimination.

“Shaming people doesn’t work, it makes them defensive, but giving them the information they need to make their own choices about their behaviour can be a really powerful way to encourage change,” Tabby says.

Finding support and standing out

Nayland College – Tabby’s high school – was the first in Australasia that she knows of to have a queer straight alliance (QSA).

“I think having a peer support group in my school sent a really powerful message that it was okay to be who I was, that my school accepted and celebrated my identity,” she says.

She says feeling connected to others going through similar experiences was a big contributing factor to her positive wellbeing.

Being part of the queer straight alliance gave Tabby the opportunity to travel to hui for LGBTTIQ youth where she started hearing other peoples’ experiences. She became really passionate about the work her alliance were doing to make things better and eventually became the student leader of the group.

After being involved in setting up Q-Youth, a community group and drop-in centre in Nelson, and QSA groups at the other schools, Tabby was inspired to set up InsideOUT.

“I saw the difference these groups were making in Nelson but then thought ‘what about the rest of the country?’” she says. “InsideOUT aims to make all schools across New Zealand safer places for young people of diverse sexes, sexualities and genders.”

In June 2015, Tabby travelled to London to be personally honoured by the Queen, in the first ever Queen’s Young Leaders Award.

She is being acknowledged as an exceptional leader in her community for her work to ensure LGBTTIQ young people feel supported at school. Tabby is one of 60 young people internationally, and the only New Zealander, to be presented with this award.

“This award is really special to me because the efforts of young people in the rainbow community is very rarely recognised, yet there are so many of us working to make a difference,” she says. “The visibility of this award means a lot.”

WHAT YOU CAN DO ABOUT STIGMA AND DISCRIMINATION
Depending on the situation people should (if it’s safe to do so):
• Report the discrimination to their principal, employer or the Human Rights Commission.
• Know their rights and that it’s not okay to be treated like that.
• Stand up for others and explain why discrimination isn’t okay – don’t be a passive bystander.
• Connect with a support group or other people who have been through the same thing, so they share stories and know they are not alone.