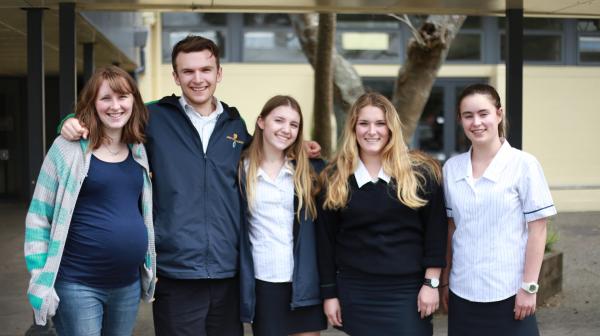 But year 12 and year 13 students were keen to improve their leadership skills, contribute to their school community, and raise awareness of mental health discrimination.

Phoebe Rooney, Paige Rundle, Penina Corcoran, Breahn Stubbs, Caitlin Flynn, and Maddy Gibson say that when they became aware of just how bad mental health discrimination can be, they thought it was the right thing to do to sign up and try to reduce it.

“We wanted to create a more positive and inclusive school community, and ensure that everyone, no matter what they are going through, can enjoy their time here.” Paige says.

Their very first campaign involved a secret mission to cover the entire school - ground, windows, doors and walls - in chalk ellipsis (the three dots that make up the Live For Tomorrow logo).

“The idea was that everyone would wonder what they were for and then at assembly we would explain what it meant and introduce what our group was about,” Paige recalls.

The campaign generated so much interest Paige had people running up to her with questions, and she overheard people discussing it on the way to class.

“I really couldn’t believe how many people were so curious about three simple dots!”

Another project was a very successful end-of-year concert, with school bands and spoken word artists. It also involved giving out special Live for Tomorrow bracelets. Phoebe used free time in classes to braid the bracelets, which led to an interesting collaboration.

“I had a group of boys in my class, who were thought to be troublesome, approach me because they wondered what I was doing,” she says.

“I told them about the project and they offered to help me make more bracelets. They spent our remaining class periods braiding, styling and promoting the bracelets with me. Having tall, buff guys crowding around, weaving little beads onto thin strands and being excited about our campaign was awesome.”

The best feeling in the world

Melissa is proud of what the GBHS Chapter have achieved over the past 18 months.

“Apart from the dots campaign (which was filmed to introduce the school to Live for Tomorrow), and the concert, the Chapter has run a poster campaign and an art competition,” she says. “Currently we are working on a bathroom mural project to spread positive mental health messages around school.”

The six girls all agree the biggest challenges are finding the time to put even a small, simple campaign together, and then getting fellow students’ attention and involvement.

“Stigma still exists,” Penina says. “When we start talking about positive mental health, some people roll their eyes or smirk or stop listening - but we use those reactions to emphasise why we are doing what we’re doing in the first place!”

The benefits come when they see the positive reactions and responses from their school community and in knowing that if they change the mindset of one person, or make them feel better, then it is worthwhile. “It’s the best feeling in the world,” Phoebe says.

For youth worker Melissa, the strength of this Live for Tomorrow project is the six students.

“We have such an amazing group of talented, hardworking and passionate young people and I have been so incredibly blessed to get to work alongside them and facilitate their group. They really inspire me!” she says.