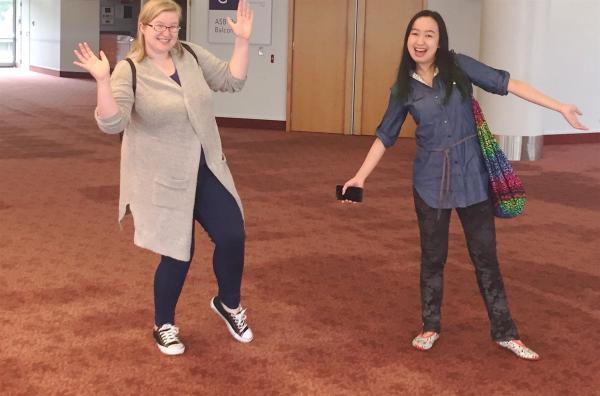 Nineteen-year-old POD participant and Auckland University statistics student, Caitlin Smart, remembers her parents telling her she was a sensitive child, but her first experience of mental distress came five years ago.

”My cousin died and a whole lot of things built up when I was 14.  That was when the anxiety first reared its head,” she says.

”Then when I was 16 I experienced depression, as well as anxiety. My parents didn’t know anything was wrong until I was sent home from school for inappropriate behaviour.”

Caitlin (pictured left with Kirsten on the right) has now developed a traffic light system with her family and friends.  “If I’m green, I go out, socialise with people and exercise. If I’m amber, my focus is more on clearing my schedule and getting on top of medication. If I’m red, I have to stop, go back to counselling and alert my parents and partner.”

The past eight months have been a revelation for Caitlin as she’s stepped outside her own experience and begun to advocate for good mental health. It started when she applied for POD.

Caitlin swears she is not a hugely creative person, but she dabbles in fan fiction and poetry and it was this talent she drew on in the first stage of her POD project.

“I decided to develop a spoken word poetry project about the superpowers that people gain from their experiences with mental distress.”

She entered her work in the Auckland University poetry slam and got a great response from the audience.  “They liked the theme of super-hero; the ‘I’m a wonder woman and look at the cool things that I can do’. I came third.”

While taking part in POD, Caitlin became involved in the co-design of Festival for the Future, a youth leadership conference hosted by Inspiring Stories.

She took on a leadership role and created a wellbeing zone where festival-goers could take a break from the conference, as well as learn more about mental wellbeing, resilience, and self-care. Part of the wellbeing zone was a beach retreat, complete with sandpit, deck chairs, sun umbrellas and ocean sounds playing in the background.

Caitlin also arranged an area where people could explore the ‘Five Ways to Wellbeing’. Activities included a card making station for people to ‘Give’ thanks to someone in their life, and a superhero wall inviting people to ‘Take Notice’ of the ‘superpowers’ they have developed to help face challenges, and share these with others.

“I wanted to create something and see it through to the end. It was a challenge managing my anxiety, my time and limitations, and other people’s expectations, but I did and it was great. I was super proud of it – it took over a whole floor of Auckland’s Aotea Centre,” Caitlin says.

Everyone brings something different

Caitlin says her work through POD proves that confronting any mental health issue is nothing to be afraid or ashamed of and that you can live with a mental illness and be successful.

“I think it is important that everyone can participate and I personally believe that those who are the most passionate about something were first deeply affected by it,” she says.

“We don’t live in a perfect world, but everyone has the right and ability to change the world and make it a better place. We won’t get very far if we exclude people because their experiences are not the same as ours.  Everyone brings something different.”