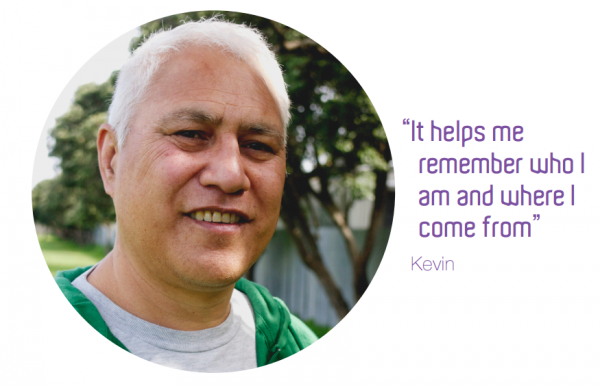 Takatāpui part of the whānau

Self-identifying as Takatāpui*, 55 year old Kevin Haunui is no stranger to discrimination.

“I’ve been hurt in ways that are hard to forget or forgive,” he says. “Words – even though they are just words – sometimes cut deeper than any actions that follow.”

He recalls his time at boarding school, where on a few occasions he was called names. “There was no physical bullying, I managed to keep away from those kinds of situations, it’s the words that hurt and disturb me the most.”

He will also never forget a family tangi, where he got into a conversation with an ‘uncle’ about his sexuality.  “He said, ‘I hope you are not that way [gay], because if you are, I’ll shoot you’. That hurt me deeply. I’ve tried to reconcile what happened, as he had the ability to be influential in the way I grew up, but because of that conversation he didn’t end up like that, which is a pity.”

Kevin’s learnt to choose his battles as he’s got older; to decide what is really important for his self-identity and good for his spirit, and what is not.

His experience has also included moments of depression, which have taken Kevin some time to work through.

“There are situations where you don’t feel like you have any self-worth,” he says. “Whether through a relationship break-up, because you are unemployed or some other circumstances in your life, it is useful to recognise there might not be anything you can do about it.”

For Kevin, the answer has been is to focus on getting positive support from whānau, friends and health professionals and - where possible - to get through his depression and move on, “as there is so much more out there to enjoy”.

However, he knows how hard this can be for many Takatāpui. “I feel aroha for those who feel that kind of despair,” he says.

Be true to yourself

Kevin has chosen to share his story with the wider Takatāpui community and contribute to the conversation about identity, so that it might help young people.

“It comes from a time when I was younger and couldn’t find any information to help me,” he explains. “I think that sparked the idea that if I share my story, it might help the younger generation.”

He says sharing his kōrero has been beneficial to him, as he openly declares what he thinks of himself.

“I’ve realised that some of what I’m externalising is not actually right, for example, [I used to think] to be gay one shouldn’t get married or have children,” he says. “I’ve actually started to question some of the things that I thought were foundational aspects to my life.“

By speaking up and challenging his own, and others, long held beliefs, Kevin is not only being true to himself - he is also encouraging others to question their own attitudes.

Takatāpui is a traditional Māori word meaning "intimate companion of the same sex." It has been adapted to embrace all Māori with diverse genders and sexualities.