Adam's project: Out of My Mind 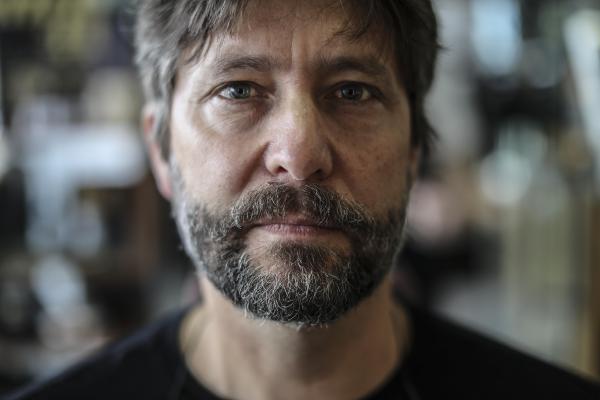 In 2018 Stuff journalist Adam Dudding won a Mental Health Media Grant for his seven-part podcast series Out of My Mind. Billed as ‘stories about mental health, told by the people who’ve been there’, the series interviewed seven Kiwis from all walks of life about their experiences with mental distress.

In 2020, Out of My Mind won a Voyager Award for joint Best Episodic/Recurrent Podcast. We sat down with Adam to find out how his project, described by award judges as “thoughtful, brave and truly insightful”, became such a success.

Where did the idea for Out of My Mind come from?
A few years ago, my friends Taimi and Stuart Allan told me about an art project where they interviewed people about their experiences of hearing voices, then hired scripted actors and created a headphones-based installation recreating the situation you were listening to. There’s also an American podcast I love called Love and Radio, where just one person tells their story. It occurred to me that by nicking bits of each of those projects, I could make another interesting one.

What do you think it is about podcasts that make them such a great way for people to access stories?
There’s an intimacy to it. You have a close one-to-one relationship with whoever is talking at the time and you listen through headphones, so it’s more immersive as well. So, if you’re listening to someone’s stories about mental distress, it’s a really good pathway to care about the person you’re listening to.

You had a wide range of stories in the series – was that deliberate?
It was very deliberate. When it comes to wanting to represent different voices, you have to think about what that means. In an ideal world you’d cover a wide range of New Zealand’s multi-ethnic society. You want young and old, North Island and South Island, big city and small city. And then on top of that, I really wanted to capture diversity in the range of experiences they had, in terms of mental distress.

What have you learned through developing Out Of My Mind?
I learned a lot about mental health while doing this… it kept striking me again and again that the feelings people described were things I could relate to: feeling overwhelmed, or hyper-alert, or over-stimulated or anxious. I haven’t experienced any of these things to the extent that the interviewees had but it was like ‘oh yes, I get that’. It’s just regular life turned up to an unbearable degree.

How was the feedback?
It was good! There was somebody who said they’d been trying to explain their issues to family and friends and never quite got there, but one of the podcast stories did that for them. Someone else said they’d never really understood what mental illness was about – and now they did. I also had a few people say, ‘I’ve been diagnosed with x, y and z and that particular story captured my experience.’

Those are the things I was hoping to achieve – to have people who knew nothing about mental illness go ‘oh, that’s what it feels like, that’s interesting’, and people who had their own experience to go ‘I feel seen’ or ‘that feels authentic’.

How did you find working with the Mental Health Foundation in the process?
Marvellous. It would have been virtually impossible to do this project without that grant; it carved a big fat four-lane motorway in front of me to be able to do it. It made it all possible.

What would you say to anyone interested in applying for a grant this time around?
Have a crack! Applying for a grant forces you to spend a day, or two, or three really nutting something out before you present it to someone. That process of thinking it through is really useful and ultimately, I got the grant.

The people I owe the greatest debt of gratitude to are the interviewees that gave me their time – and in some cases, it was a lot of time. People who were willing to put themselves up on display to reveal their intimate secrets and their darkest moments, to trust me to try and tell it in a way that was honest. Those are the other people I’m most grateful to.

Apply for a Journalism grant now.