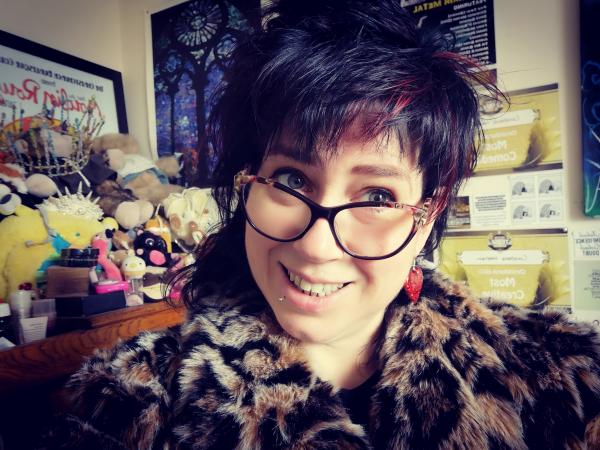 As a lived experience facilitator and trained social worker, Hannah Whittaker-Komatsu knows what living with mental distress can be like from both a personal and professional perspective. She first encountered the mental health system when she was eight years old after disclosing sexual abuse and has lived with a range of diagnoses ever since.

Turning those experiences into something that no longer defines her has been Hannah’s life work for the past 20 years. She is now passionate about passing on the message that living with mental distress can be something to work with, rather than work against.

“I’ve had to experience what it’s like to live within that continuum of wellbeing,” she says.

“To get to a place of understanding that my experiences, which are called ‘disorders and illnesses’, are actually part of who I am.

"I’ve had to learn to love those components of myself, because they are the things that allow me to be alive, to be creative and to survive the first 21 years of my life.”

That shift in thinking has supported her in becoming who she is today.

“The good, the bad, the ugly and the beautiful.”

The ’diagnoses’ Hannah has been given include Borderline Personality Disorder (BPD) and Other Specified Dissociative Disorder – and for a long time, she says, she experienced them as “predictions for my life that were cast upon me”.

It was a painful process, she says honestly, learning to reframe them. But it is a process that changed her life.

“The story I’d been told is that if you don’t fit the mould, if your way of being isn’t typical or if you can’t do all the things that are considered ‘normal’ for a human to do, you are then disordered or ill,” she says.

“Whereas for me, I’d had these massive experiences when I was younger, so it made perfect sense that I wouldn’t be behaving typically, or feeling so great.

"For so long, I believed that the experiences I had in childhood had broken my brain… but it’s actually bollocks. Believing that just gives the power over my life to the people who harmed me.

“I had to start to understand and build a relationship with my experiences. Now I think it would’ve been more disordered if my brain hadn’t reacted in the way it did, if I hadn’t created these distinct ways of moving through the world.”

It was a shift of thinking she found empowering, Hannah says.

“I have taken my power back.”

There were limitations, made by others, that came with those diagnoses when Hannah was younger.

“When I was 17, I was told I would be unlikely to hold a long-term relationship because of my BPD diagnosis,” she says.

It also affected the career path she took – although, she says, she has no regrets in training as a social worker. Being able to help others break free from similar limitations “is a fundamental reason for me to continue existing”.

When it comes to looking after her wellbeing, Hannah says having a connection to the world around her is key.

“Whānau but also whenua; making sure I am an outdoor creature at times.”

Creativity and contribution are also the big drivers in making her feel strong and healthy – both of which have combined in her launching the Divergence Festival, which takes place the week before Mental Health Awareness Week (21-27 September). It’s an upcoming event she describes as “a Mad pride event: celebrating mad, divergent and neurodivergent lives”. Kicking off on 12 September, the Divergence Festival will take place in Ōtautahi/Christchurch and include events such as the Black Dog Walk Off and Mad Poets.

But the biggest source of ongoing wellbeing support for Hannah has come from her community of friends and loved ones. The love her mother had for her, she says, was transformational.

“She held the faith with me – she saw me as her daughter, even when I was acting in an unusual manner, she still saw me as her Hannah.”

It was the same with her core group of friends.

“They still saw me as who I was at my best, even when I couldn’t.”

Having people look beyond the labels and ‘diagnoses’ placed on Hannah helped her to eventually do the same.

"Now, at 43 years old, I’ve moved to a place where those definitions and categorisations of my lived experience throughout my life – they don’t define me and they certainly don’t predict what my life is going to be.

"I’m going to live to be more than what those predictions have said about my existence.”