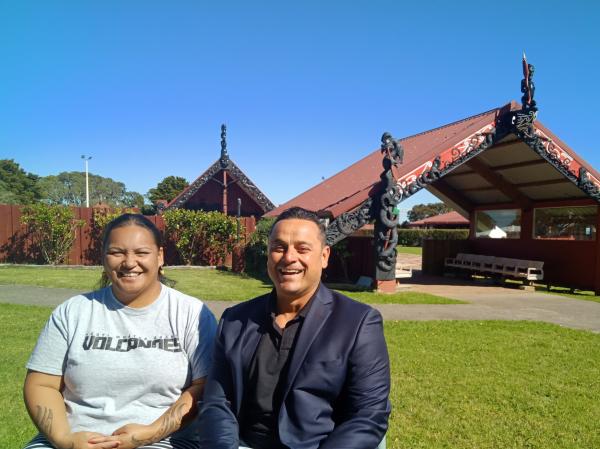 Youngies vs. Oldies Netball Day, an intergenerational Māori netball event, was funded by a Like Minds, Like Mine Community Grant last year.

We sat down with Monique Pihema and Jamie Cook, the project’s two leads from Ngāti Whātua Ōrākei Volcanoes Sports Club, to talk about how the event helped to remove shame around mental distress and promote inclusive messages that still echo with their wider whānau today.

The event is a tradition for us at Ngāti Whātua Ōrākei, and our Volcanoes Club have been running it for about
three years.

Last year, we hosted the day based around the slogan ‘Patua te Whakama’ or ‘remove shame’, so that whānau know there's no shame in talking about their mental distress.

Q: How did you come up with the idea for last year’s version of the Day?
Jamie: The original Volcanoes Sports Day was our catalyst, but we really wanted to create intergenerational discussion to reduce mental distress discrimination here at Ngāti Whātua Ōrākei.

Mental distress doesn't discriminate, and our community is not exempt. We're aware of our own mental health issues within our own families, and when I say our families, we are one family here. It’s our young ones, our males, particularly around my age - 30 to 40 - that particularly struggle with their mental distress, as the stats will show. Our younger Māori men and women, we wanted to show them that there is light at the end of the tunnel.

Monique: We really wanted a kaupapa to deliver the whakaaro (opinion) around mental health for our wider whānau. We knew a tohu, or sign – in this case 'Patua te Whakama', or to remove shame – attached to the day would really help carry this korerō (conversation) across the generations.

Q: How did sports play a part in reducing prejudice and discrimination against mental distress?
Jamie: Sports has always been a driver in this community. It is a time where we all come together.

In times of adversity, sport has been an outlet for us. We have had some really hard times here in this community, but one thing that's always kind of remained is sport. And we do everything! We'll give everything a crack. We're pretty good at it, too!

Q: The event has been described as ‘intergenerational’ – as necessarily involving several generations. Why was it important to your event to involve people of all ages?
Jamie: Breaking down those stigmas, those barriers to talking about mental distress is really important in removing shame around those experiences.

I think you're winning there, right - when you’ve got intergenerational discussion around mental health. It's great if you can do it within your own little cohort, but it’s even better if you can do it right through the whole family.

Q: A key part of Youngies vs. Oldies Netball Day was the slogan 'Patua te Whakama' (remove shame). Can you tell us more about this message?
Monique: We developed it in a sports meeting, when the kaupapa came up around applying for the Community Grants funding. We knew that the Volcanoes Sports Day would be a great vehicle for a slogan around mental health, and that the slogan’s message could be carried as a Facebook hashtag, printed on t-shirts and used in a photo booth – things that are cool for rangitahi (young people) apparently! We wanted to be able to capture the different audiences.

Our community were already looking forward to the next Volcanoes Sports Day. We thought it was really important to tag ‘Patua te Whakama’ onto this event, because its message would reach more people.

Q: How did the day turn out?
Monique: We hosted Youngies vs. Oldies Day up at the local school, and everyone right from our 80-year-olds right through to our eight-month year olds were all there participating or watching and enjoying the day.

It was a sports day with a photo booth, prizegiving and t-shirts, and was shared via our Facebook page and over community emails. We had a males’ game of netball, and then a mixed game. At the netball, we had free sausage sizzles and water going for our whānau. It was really cool - the kids loved it, because they love to do haka, it made it really easy to connect with.

The slogan also became a chant! During the netball, Jamie was chanting and the slogan’s message stuck with us all the next week! He would call out: 'tahi, rua, toru, wha', and then the kids and whānau would say: 'Patua te Whakama!' That ended up being the chant throughout the whole day and beyond, until we got it out of our heads!

Jamie: We also had our kaumatua (elders) at the event, and some were sitting on the banks weaving. They were so enjoying being able to watch their mokos (younger children) play in a really safe environment with some really cool, positive messaging. No smoking, no alcohol, no swear words! I think when you set that environment, when you set that scene, it becomes a really safe place.

Q: How do you think Youngies vs. Oldies Netball Day helped people in Ngāti Whātua Ōrākei who live with mental distress?
Monique: Some people have really taken the slogan of Patua te Whakama on. One girl in particular has really taken on the message and is using it to create a bit of a campaign around embracing our whānau when they are experiencing mental distress.  She's still carrying on that passion from that day.

The event was also really important for us at that time, because we had whānau pass away and some of it was linked to mental distress, so it was still quite fresh in the community's minds. Whānau really got the Patua te Whakama slogan because of that.

Something needed to happen after the mate (death), and the event was a way to bring some sort of discussion and closure to it. That worked really well.

We have a tipuna called Titahi, who prophesised the coming of the ships to Auckland shores, which is pretty much the start of Auckland city here. He prophesised that hundreds and hundreds of years ago. If that was to happen nowadays, he could be considered to be experiencing mental distress - but for us, in Te Ao Māori, it's a taonga - it's a gift that's been handed down from generation to generation to be able to foresee matakite (visions of the future), to be able to foresee what beholds our whānau in the future.

Q: What do you think are the barriers to whānau opening up about their experiences with mental distress?
Monique: Our tikanga (customs) mean that whānau aren’t always seen as experiencing mental distress. How do you know if you need help if you're not sick?

For example, last night we had an event at the marae, and we were doing the powhiri (welcoming) process. One male speaker got up and was talking, and then another guy came and just cut in front of him. That’s not a part of our tikanga - you don't do that. We understood that he may have mental distress - but no-one blamed him, or growled at him or anything, we just manaaki'd (supported) him and looked after him, and brought him a seat to sit down, kei te pai, kei te pai. And then he felt hungry, so someone said 'do you want a kai?', and he said 'yeah, yeah', so someone just took him out quietly and went to get him a feed.

In Māori tikanga, we just wouldn't discriminate against him. You wouldn't do that in a marae. Our approach is a bit different because of our cultural understanding and our values. Our values play a big role in being able to manaaki our whanau.

Q: We often talk about intersectionality here at Like Minds, Like Mine – the idea that people can experience discrimination on many levels for different identities they simultaneously inhabit. How can being Māori intersect with experiences of mental distress?
Monique: Māori live in two worlds: we live in Te Ao Māori, and now in Te Ao Pakeha. We're having to juggle expectations from both worlds.

Jamie: Urbanisation and colonisation have not served the Māori population well.

We are living in a really fast-moving Te Ao Pakeha world - especially in Tāmaki, here for us, the people of Ngāti Whātua Ōrākei. We live in such a dynamic city, sometimes it's really hard to slow down, to take in and centre yourself in all four of those realms of Te Ao Māori; in our whare tipuna (ancestral land), which is the realm of Rongo-mā-Tāne, the god of peace.

If we look at some of our leaders in Māoridom - Mason Durie, and his model of Te Whare Tapa Whā, which talks not just about the tinana (body), but about hinengaro wairua (mental health), whānau, whenua (land), and our connection to Papatuanuku - he really talks to our juggling of these two worlds.

It’s important to look back at those teachings from those leaders and our tipuna (ancestors), because that balance for Māori and the need for us to centre ourselves in our own model of wellbeing is really important for our health in all areas. Not all people are aware of, or understand this, and this lack of understanding can lead to intersectional discrimination.

Q: How did you first hear of Community Grants?
Jamie: I first heard of the Grants through a referral from a friend, somebody that works in the community in that space. We thought this could be a really cool opportunity for us, a chance to raise awareness but also to bring our community together.

Q: What was the best thing the Grants enabled you to do?
Monique: For Māori, we're really into tohu, we're really into signs, so being able to label our whānau with the t-shirts saying Patua te Whakama and have them all out there - all different generations - was really important to be able to share the kaupapa. We wouldn’t have been able to do that without the Grant.

The Grants also really made us think about the messaging. Even when we think about it a year later, the message is still in the community – the event is referred to as its message - Patua te Whakama.

Q: What would you tell someone who is thinking about applying for the Grants?
Monique: Well, it’s definitely worth it! It brings awareness to the community, and the process was simple. Go for it!