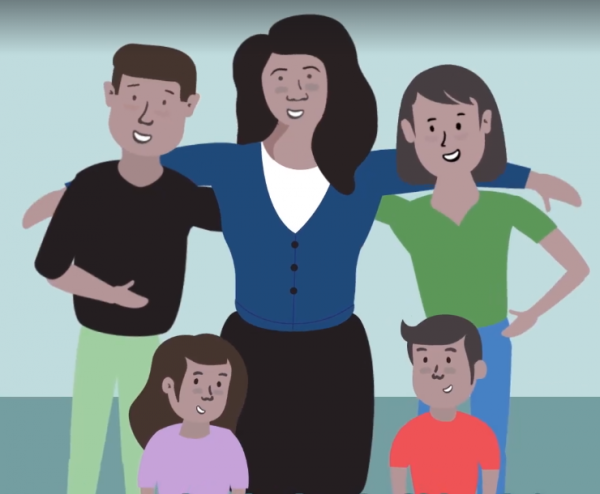 Cantabrian Maria*’s experience with mental distress started when her marriage broke down and she was left to raise her two kids on her own in Auckland.

“There was huge financial pressure on me and I had to move back home to Christchurch to stay with my elderly parents. I felt a sense of desperation to get myself back on track and be able to provide for my family.”

Maria decided that to further herself and use her creative talents, she needed to study. She was accepted into a broadcasting course as a mature student and poured her heart and soul into it.

“I worked incredibly hard and that paid off. I excelled and started doing voluntary work on top of my studies so I could get a foot in the door in the production industry.”

But by the end of Maria’s first year of study, she was exhausted.

“I burnt out, I had too many commitments and the pressure I had been feeling reached boiling point. I knew something wasn’t right and my doctor diagnosed me with depression.”

Maria saw a counsellor and started taking anti-depressants. She put her course on hold and decided to focus on looking after herself and her kids, but things at home became difficult.

“My family just didn’t understand what was happening for me and the environment became toxic. I was copping a lot of flak and verbal abuse – when I couldn’t get out of bed I’d be called useless and lazy.

When I expressed how much I was struggling I was labelled a ‘drama queen.’"

Maria says there were definitely cultural beliefs that influenced her family’s behaviour.

“From a cultural perspective there is huge shame and superstition associated with mental illness. There are also strong expectations of what a ‘good Samoan female’ does – she cooks, she cleans, she works and makes the family proud. I wasn’t doing those things and they were frustrated with me.”

Maria ended up moving out of the family home with her kids.

“I wasn’t made to feel welcome and the insults became too much.”

It wasn’t long after moving out that she hit “rock bottom” and her family came to realise that she needed their understanding, help and support.

“A couple of my sisters came over from Australia and we had a family conference. There were lots of hugs, tears and apologies. My family said they were sorry for not taking me seriously, for not taking the time to really listen and try to understand – that was a pivotal turning point.”

From there Maria says her family did a complete 180 and have shown unconditional support to her.

“My parents have been a huge source of strength over the last two years – they’ve given me the space, time and patience that I needed to begin my recovery journey. They’ve taken the weight of the world off my shoulders by doing things like cooking meals and dropping my kids to school if I’m not well enough to. Just little things like giving me the freedom to lie in and choose when I eat dinner has been huge.”

Maria now coordinates a former Like Minds, Like Mine programme working with Pacific youth to help them express themselves creatively and promote social inclusion and acceptance of people experiencing mental illness.

“My job gives me a reason to get out of bed and allows me to use my experience of mental illness, and my creative talents and communication skills to make a real difference for Pasifika youth in Christchurch.”

Maria says she’s still on a continual journey, but she’s learnt to celebrate the small victories.

“I feel really proud when I can get my kids to school on time, or when I manage to cook a couple of dinners a week – when I do those things it helps remove the guilt I’ve often felt for not always functioning as an A-grade mum”.

Maria says despite what she’s been through, her experience has been a blessing.

“It has forced me to re-evaluate my life priorities, to honour my mental health and to have the utmost respect for other people’s stories.”

Maria says her personal hope for the future is to be healthy and successful and she wishes the same for the people she works with in her community.

“I just want blanket acceptance and support for everyone.”

Maria's story was originally featured in our Take the Load Off campaign.

*Name has been changed