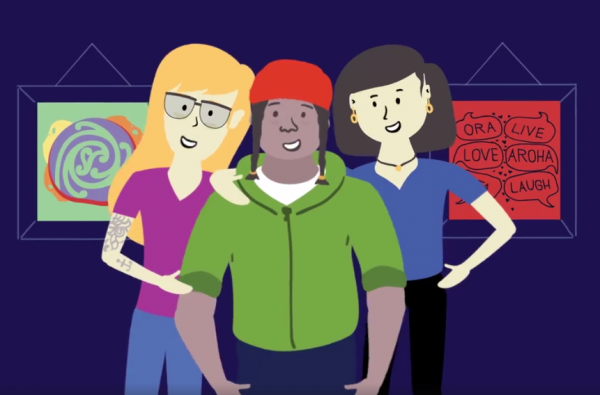 Ana Jakeman has seen and heard things other people can’t for as long as she can remember.

“Growing up, most people thought I just had an active imagination. It wasn’t until I was 23 that I had a psychotic episode and was diagnosed with schizophrenia and bipolar.

The voices were mostly positive until after the birth of my first child. I was in a mentally-abusive relationship and things just spiralled. My family admitted me to a psychiatric ward."

Before her diagnosis, Ana says she had loads of friends.

“They were around when I was manic and out for a good time, but they’d talk about me behind my back and say I wasn’t all there. When I went into the psychiatric ward, most of them dropped like flies – it was crushing.”

Ana believes the rejection came down to fear.

“Seeing and hearing things comes with a shame attached to it, and although the psychiatric ward was a haven for me at the time, it was a scary place to some people – it was called the looney bin.”

But two of Ana’s friends did venture into ‘no-man’s land,’ they weren’t ashamed to be seen with her, which felt ‘like the light at the end of the tunnel.’

“I had my clothes stolen from me when I was in the ward, and my friend Lynn brought me in some new ones, and some food – the small creature comforts made a huge difference.”

When Ana left the hospital she felt ashamed of what had happened, but her two visitors stuck by her side.

“My friend Karen gave me so much hope. She saw me as an artist and a mother, not someone scary. She introduced me to her friends and was proud to know me – that meant so much to me.”

It’s been over twenty years since Ana was diagnosed, and although every day is a struggle, she’s learnt coping strategies.

“I call my negative voices 'the mob'. They’re there at my heels, but over time I’ve learnt how to focus in on the positive voices.

I hear three distinct voices which help me – they tell me I’m worthy, that I’m loved, to hold on and see the good in the world – I love those voices, they keep me well.”

Ana’s also learnt the importance of self–acceptance and self-care.

“Once I opened up and was honest with myself things became easier, it was freeing. I also know that to stay well I need to eat and sleep well and stay away from drugs and alcohol.”

Another learning curve came in the form of professional help.

“It took me a long time to trust that there are people in the mental health system who genuinely care and want to help. I had one psychiatrist who told me I shouldn’t have children and booked me an abortion! Thankfully I now have a wonderful support team, who really are the pinnacle to me staying well.”

Ana believes her experience is a privilege.

“It’s given me empathy and insights for others who are outside the norm – I can see past the labelling. I am also very in touch with my inner being and it inspires me to create my art work.

“I love being me now – I was created this way and I’m empowered by it. I wouldn’t change a thing.”

Ana's story was originally featured in our Take the Load Off campaign.