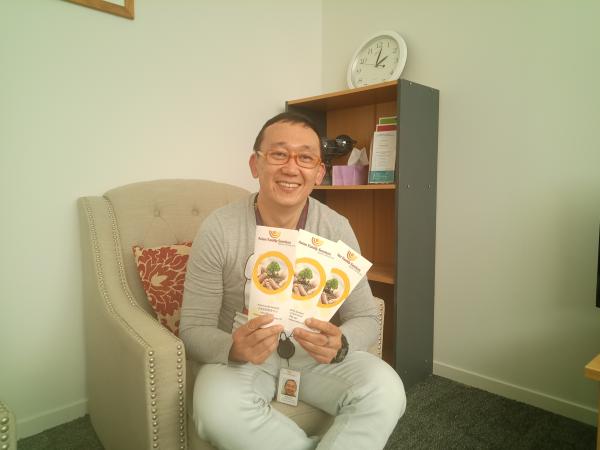 You Are Not Alone is a video and poster campaign produced by Asian Family Services, and funded by a Like Minds, Like Mine Community Grant in 2018.

The campaign, which features videos and posters, was translated into Vietnamese, Chinese, Korean, Thai, Hindi, Japanese and English to communicate to our Asian-heritage Kiwis that they don’t have to experience mental distress alone.

We sat down with Ivan Yeo, the campaign’s lead at Asian Family Services, to find out more about the campaign and what receiving a Like Minds, Like Mine Community Grant was like.

Q: Can you tell us more about why you wanted to develop You Are Not Alone, and how it was inspired?
In New Zealand, there are a lot of Asian people who feel very alone. They often believe that you shouldn’t tell people about your problems, so they internalise feelings of shame and stigma about their mental distress.

We really wanted to let these people – who are often young – know that this isn’t the case, that they don’t have to experience mental distress alone. All people need help at some stage – it’s just part of being a human being.

I discussed the idea with our counsellors here at Asian Family Services, and we came up with the idea to translate this message into seven different languages – and You Are Not Alone was born. We felt that we could really make a difference by communicating that people should reach out by using the Power of Contact – and that they’d be surprised at how many people would be willing to help them if they did!

A lot of Asians growing up in New Zealand can feel socially excluded – they don’t feel part of the mainstream Kiwi culture, but they’re also not really ‘Asian’ according to people in their home country because they grew up here.

We also have evidence that when young Asian people experience mental distress, they don’t feel that they can tell anyone. Mental distress is not commonly talked about in Asian cultures. They don’t want to tell their parents because they don’t want them to worry; and often when they do tell their parents, they refuse to let them receive help because of their fear of being discriminated against. Sometimes their parents don’t even want to talk about their mental distress with them in private– they feel more comfortable not seeing it, and not acknowledging it. Other people outside the family aren’t supposed to know. There’s a lot of hidden issues.

These young Asian people really need to have an outlet to talk to someone and share their feelings, so we wanted You Are Not Alone to give them a platform to do that.

Q: What inspired you to do an animation?
It’s a generalisation, but – Asians really like cute things! Soft toys, manga, we really like animations. Throughout Asia, animations are a big thing because of the influence of Japanese culture.

Animations are also universal, and really easy to relate to. It’s a challenge to communicate in seven different languages – and it’s impossible to feature people that all backgrounds will identify with, but an animation works for them all!

The other reason we used animation is because loneliness and social isolation can be hard topics,  and animations are a relaxed and fun way to tell people they are not alone.

We knew our Asian audiences used technology often, owned cellphones and had good access to data so it made sense to use a QR code, which they are already familiar with, on the posters. They could then scan the QR code and watch the videos from there.

We wanted information that was tangible and easy – the kind of information people would look at and say: “I can do that! I understand that! That’s easy.” A lot of the information came from the Mental Health Foundation (MHF)). We didn’t want jargon-y language, or language which made people think they had to be a mental health professional or a trained counsellor to help.

We wanted to use simple facts and figures to show people that everyone can be there for, and show respect to, someone with mental distress. There’s no better way to show your empathy and connect with another person than to be there – it’s simple!

Q: How have the videos and posters been used so far?
We’ve sent them to the Citizens Advice Bureau (CAB), and some District Health Boards and libraries. The CAB has come back to us and asked for more brochures.

We’ve also sent out the videos and posters to schools – private training establishments – and they have said thank you so much for sending through these videos, as they are so helpful to the international students! There are no resources out there that offer something similar.

Q: How did you first hear of Community Grants?
I think it first came up for me on your Facebook page!

Q: What was the best thing the Grants enabled you to do?
The Grants really legitimised our concerns. Our whole team come across the problems that You Are Not Alone addressed all the time – especially working in the gambling harm space, where people often turn to gambling because they are lonely and experience mental distress. The Grant we received really helped us to get these messages out to our community.

We’ve always told people to get help early and to reach out to others when they are experiencing mental distress, but now we have a resource that makes it clear that there is nothing to be ashamed of, that you can get support, and that you can be a good friend by reaching out to others.

Q: What would you tell someone who is thinking about applying for a Grant?
It’s great fun! I really enjoyed it, the full process – especially being able to put an idea together with my colleagues and exploring different reach-out methods.

There’s a lot you can do with the money – we managed to engage an animation company and develop a QR code and posters – it’s a start!

Q: If there is one message you could leave our readers with, what would it be?
You are not alone – together we can make a difference. We really believe that. In any situation – two heads is always better than one. If the first person doesn’t listen, try another. No one can say that they have a perfect life, that is impossible!

Be kind to other people who might be experiencing distress. You don’t have to do a massive thing – no one is asking anyone to be Oprah Winfrey! If you can reach out to the next person you meet who might be having a hard time, that’s enough.