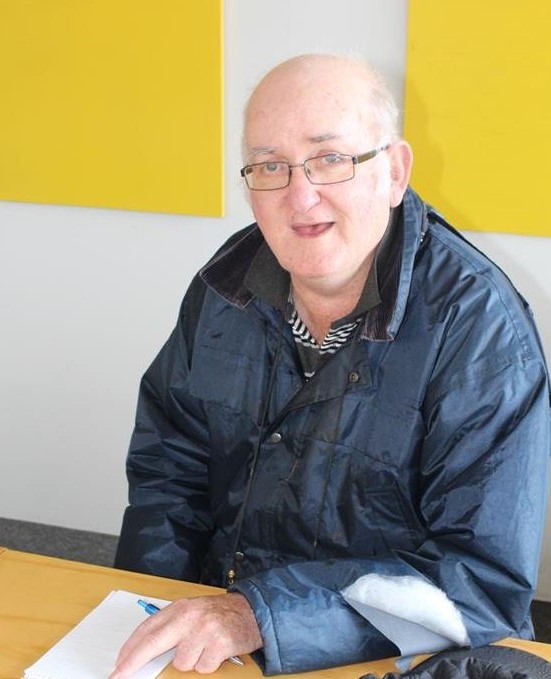 Terry also spent five years at Sunnyside Hospital – the same hospital Kiwi writer Janet Frame wrote about in her book An Angel At My Table.

25 years later, Terry is an active advocate for mental health consumers in Canterbury, and writes poetry as a way to help manage, and reduce prejudice against, experiences of mental distress.

Terry believes his experiences with mental distress may have first been exacerbated at high school.

“I was bullied a lot in my younger days. I was bullied from my secondary school days until my first job at the freezing works.”

While working at the local freezing works, Terry found an outlet for his experiences with mental distress – writing poetry. He was supported by his union to share his story with other workers.

“The Union secretary sponsored me to do a 15-minute speaking segment for the workers. I loved it.”

Writing as a way through

During his freezing works career, Terry was admitted to Sunnyside Hospital after a significant experience with mental distress.

“I was a forensic patient at age 45 after a manic episode. I spent five years there.”

While at Sunnyside, Terry found writing poetry helped him work through his recovery and negative experiences.

“Even through my illness, I still wrote poetry. If I was at Sunnyside and something bad happened, I could always go back to the room and write about it.”

It was during this time that Terry met Linda Simpson, a former Canterbury District Health Board consumer advisor. Linda was an inspiration to Terry and encouraged him to become involved in advocacy for other consumers.

“When I was a patient at Sunnyside, Linda came to visit me and took a couple of my poems to Auckland. She encouraged me to join the Canterbury District Health Board Consumer Council. She was inspirational to a lot of people, me certainly.”

While at Sunnyside, Terry wrote his first short collection of poetry about his experiences as a patient, entitled Shit In Your Eye.

He also joined the Consumer Council and later became a representative of the Richmond Fellowship, a community support service for people living with serious mental illness.

Writing as a way to help others

Terry’s experiences at Sunnyside and working in consumer groups have given him a unique insight into how he can help others in his community.

“When I was part of the Consumer Council, I would take consumers food gifts. Consumers were more interested in appreciation and praise rather than policy. This made a big impression on me.”

“My philosophy now is to work with other consumers to give praise. I think affection and praise go a long way – they certainly did for me.”

Terry’s writing has helped shed light on his experiences in the forensic and mental health systems. At Sunnyside, Terry published Shit In Your Eye (1999) and the poetry collection Unforgiven Forensic (2003), which both spoke to his experiences there. Three more books, radio plays and short stories have followed.

Terry is also heavily-involved in public projects that reduce prejudice against people with mental distress.

He has performed his one-man Spoken Word poetry show, Mud, to more than 20 audiences across Australasia, and runs his own award-winning mental distress radio show, Calm Minds, which has just celebrated its 10th year. He hopes that these efforts are reducing discrimination.

“Sometimes, as a consumer, people aren’t always that nice to me. Some consumers get used to that. I like to think that, through my various projects, I am writing and sharing stories for all consumers, so that they don’t have to face that prejudice anymore.”

''When I share stories on Calm Minds, I try to put a positive spin on what people living with mental illness have achieved. If they are managing their illness or if they are getting on with their lives, they are survivors. They are winners.''

Terry also contributes to a number of poetry groups and initiatives in his community. He partnered with community rejuvenation organisation South Alive to produce a poetry festival in primary schools – which received 300 entries in the first year. He is also starting an anti-bullying poetry group for people who live with mental distress.

“I’ve accepted my pain by doing something with it. I’m not broken. I’ve found a cause – working with consumers, writing poetry and encouraging them to write poetry so they can work through their experiences, too.”